On the field, violence and aggression are virtues. Off of it, there is a different set of rules. With all eyes fixed on them, players have no choice but to navigate both worlds.

“What we do out here would be deemed assault anywhere else.” | Eric Hicks 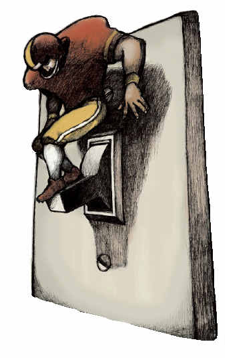 The transition is over when Kawika Mitchell is at home, finishing up a big bowl of cereal.

It begins when he walks off the field. When he no longer feels like a superhero.

“You put the helmet on,” Mitchell says, “it’s like putting a mask and cape on.”

Mitchell’s mask and cape are off in the locker room after a recent practice. The Chiefs’ starting middle linebacker removes his skull cap and sweaty undershirt and heads for the shower. Mitchell doesn’t take long showers like some guys do. He prefers to sit at his locker for as long as it takes. He is usually one of the last ones out.

Players have different methods of decompressing. After this practice, wide receiver Samie Parker chides a teammate who is sitting on his stool without a towel underneath, an apparent locker room faux-pas. “That’s the booty stool now,” Parker says, laughing. “Someone else might get that stool tomorrow, and it’s got your booty on it!”

Defensive end Eric Hicks doesn’t like to linger. He spends enough time with his teammates. He uses the half-hour drive home to Overland Park to become Eric Hicks, husband and father of two.

“Obviously, we get paid to pretty much hurt each other,” Hicks says. “If you have a wife or girlfriend, you definitely can’t have that kind of aggression. What we do out here would be deemed assault anywhere else. You have to tone it down.”

Defensive end Jared Allen, like many players, calls it a switch. Players are expected to turn it on and off.

As someone who has never played professional football, you wonder if that’s fair. After all, Chiefs coach Herman Edwards, in the process of learning about his new team, has openly talked about wanting to see which players are violent.

But the Chiefs don’t use the excuse of being violent or aggressive on the field when they transgress off of it. As executive director of player development Lamonte Winston says, the players who can’t turn it off are just “knuckleheads.”

“It’s the mark of a true professional,” Hicks says, “being able to turn off that switch. I think it’s just an understanding of what you are and when you need to be what you are.”

In the old days, there were no Lamonte Winstons. There were only veteran players, and if a young player had a problem away from the field, he had to draw up the courage to ask a veteran what to do. Most wouldn’t ask.

In every locker room, players knew who the bad seeds were, but it was rare that anything would pop up on police blotters or front pages of sports sections.

In 1998, authors Jeff Benedict and Don Yaeger released their book, Pros and Cons: The Criminals Who Play in the NFL. In the book, the authors released a statistic that made NFL executives cringe: 21 percent of NFL players had been charged with a serious crime.

The authors alleged that teams were knowingly letting players who were undergoing criminal investigations play on Sundays, that the NFL wasn’t closely investigating violent crimes. The league, according to the authors, cared only about substance abuse and gambling, issues that affected the “integrity of the game.”

Sure, Pros and Cons was a bit sensational. But it also appeared to be well-researched. And, coincidence or not, the NFL created a violent-crime policy as the book was being researched. That policy would later become today’s “personal-conduct policy,” which allows the league to discipline players with fines or suspensions. The league was also working to improve its player programs, which had been in place since the early ’90s, and had its first rookie symposium in ’97.

Since the book’s publication, player crimes have become much more public. Two NFL players — Rae Carruth and Ray Lewis — have been charged with murder. Carruth was convicted and is serving time, and Lewis pled down to a lesser sentence.

In Kansas City, of course, there was the crazy night in training camp last summer. In Cincinnati, the Bengals are under the microscope because of five player arrests this off-season.

Newspaper columnists, TV pundits and fans have become equally frustrated with their Sunday afternoon heroes. The logic goes: They have everything they’ve ever wanted — fame, fortune and a career that allows them to release their aggression. So why can’t they stay out of trouble?

Must be a faulty switch.

Want to get a football player really riled up? Imply that he has a higher propensity for violent behavior because he plays a violent game.

First off, he’ll say, football is more than just a bunch of guys ripping each other’s heads off. Only about a quarter of the positions on the field encourage violence. Look at the offensive skill positions. They are taught to avoid contact and are paid to do so.

“I used to argue that football wasn’t a violent game,” says Don McPherson, a former Eagles and Oilers quarterback. “If a defensive lineman clipped me on the back of the heels, does he still get a sack? Wouldn’t he get up with the rest of the linemen and pound his chest? We tend to put it in these glorified terms: ‘He’s an animal.’ No. He just tripped somebody.”

After his career, McPherson worked at the Center for the Study of Sport in Society at Northeastern University. From 1996 to 1999, he was the director of the Center’s Mentors in Violence Prevention (MVP) program, which focused on preventing domestic violence. He knows the issues are there with NFL players. He just thinks the “football players are violent” argument undermines the real problems.

“There are a lot of factors you have to look at about these guys,” McPherson says, “who they are, how they were raised. It’s far too simplistic to say, ‘It’s the culture of the sport.’ You’re not taking into account that this guy grew up in a single-parent home, that his father was abusive, that he grew up with this being the social norm. I’ve been to safe-houses across the country for domestic violence. They aren’t filled with the families of the local pro team.”

Liffort Hobley, a former Dolphins safety, started a program called Athletes Against Domestic Violence after his career had ended in the mid-’90s. When asked about the idea of a “switch,” he responds animatedly, “What switch are you turning off? I still don’t know.”

Jared Allen has an answer. There are two switches. There’s the one everyone talks about, which controls your level of aggression. He’s had problems with this one before.

“As a pro, you learn, fighting is stupid,” Allen says. “It is a switch you have to learn. On the field, someone says something, you’re going to take them out on the next play. In the real world, you can’t do that.”

Then there’s the more important switch, the one few people talk about. It’s called responsibility, and the switch is turned on as soon as you’re drafted.

“You’re always going to be targeted,” Allen says, “but you can walk away. It’s a part of the business. You sign up for it when you decide to put on a professional uniform.”

Allen can still hear his football coaches as a child: “Be mean, be tough, be aggressive, be vicious out there.”

So that’s what Allen did, and as an 8-year-old, he wasn’t really thinking about switches and such. He got into fights often. All he knew was that he wanted to be a football player, which meant being mean, tough, aggressive and vicious.

Cristina Versari, a sports psychologist at San Diego University, believes that many pro athletes have what she calls “Athlete Developmental Deficit (ADD)” because they have focused on one thing — becoming a pro athlete — for too long.

“They became professionals at a very early age,” Versari says. “In order to be able to accomplish such outstanding results, they had to sacrifice their childhood. In some aspects, they developed skills that most people their ages did not. On the other hand, they did not develop emotionally as the other people their age did.”

Versari continues, “Developmentally, the ‘I’ continued to evolve while other parts of it got left behind. The players were able to accumulate skills and think in adult terms, but certain sides of them remained as young as they were when they started their rigorous training. The ego of many athletes has suffered huge ‘holes’ and missing pieces that are difficult for those of us who enjoyed a safe upbringing to comprehend.”

As a result of these “holes,” Versari says, pro athletes may engage in self-destructive behavior to distract them from emotions they can’t handle.

Bill Howatt, an expert in behavioral science and a former college football coach in Canada, refutes the notion that there’s anything inherent in football players as a population that can explain their off-field actions. Howatt, instead, points the finger away from the players.

“We’re pushing these guys up the flagpole too high,” Howatt says. “They’ve become iconic, Godlike. We as a society, we’re supporting this.

“Who created the rebel? Is it the football player who is a rebel, or is it us as a society who just keep feeding into this thing?”

Lamonte Winston hates it when people call him a babysitter.

In his 11th year as the Chiefs’ head of player development, Winston’s job has certainly changed. When player programs started in the NFL, they helped players make smart investments with their money and prepare for a successful life after football through continuing education.

Now, it’s more complicated. Winston helps the Chiefs make good decisions at home with their wives and girlfriends. He warns players against letting their families or friends drag them down. He tells them what they’ve probably already heard from rapper Biggie Smalls: More money, more problems.

“The players trust that you will be there for them,” Winston says. “This is a multi-billion-dollar industry, period. You have to learn the rules of that kind of industry so that you can survive.”

Every year, Winston tells the rookies about Kansas City.

“We’re a big little city,” Winston says. “If you’re a Chiefs player, you’re a big show in town. If they’re out there seeing you do bad things, they’re going to take it personally. If you’re in the big city, players can get lost. In KC, tell me the celebrities …

“Guess what, everyone knows what Tamba Hali looks like now. He has to watch everything he does. My job is to give him the lay of the land, to make sure Tamba understands that this is not Penn State.”

Some players get it, and some inevitably don’t.

“I tell our players, if you ride around KC in a Bentley … how many Bentleys are there in KC with 22-inch wheels?” Winston says. “You bring that attention on yourself.”

“They’re laughing at him,” he says. “It’s like a tabloid mockery thing. If that was an NFL player, they’d make him seem like he’s the worst.”

Winston really isn’t crying “unfair” here. It will always be this way. That’s why every year at the NFL rookie symposium, he makes sure the players know that their life is about to change dramatically.

“Fellas,” Winston will say, “this is what you signed on your contract. The really small print? This is the NFL. You do have to change your behavior. The day you walk into this organization, you have to expect change.”

The ones that don’t? Well, Winston might be right. They may just be knuckleheads.ua.prodvijenie.xyzseo это